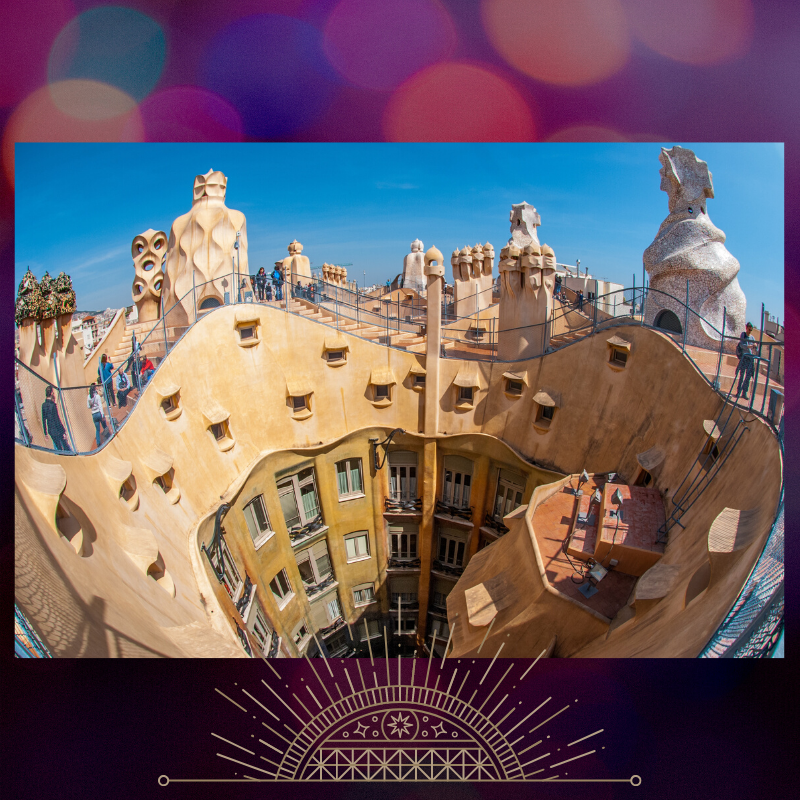 The next book in the Sister Witches Urban Fantasy series is DONE! <<<insert big grin>>> Okay, done-ish. The manuscript goes off to my editor tomorrow for developmental edits. To celebrate, I’m posting chapter three of DEMON LINES (working title, not edited, not proofread, you know the drill). It’s in Laszlo’s POV. Enjoy!

And remember: If you haven’t read Once Blessed, Thrice Cursed but you intend to, STOP NOW, because SPOILER ALERT.

I’M SERIOUS. DO NOT READ ANY FURTHER IF YOU HAVEN’T READ ONCE BLESSED, THRICE CURSED.

“Then let me show you my home, Clementine.”

My tired witch was in for a surprise. A good surprise, I hoped, after all the shocks and revelations that had been tossed at her over the past three days. Unless my brother, Kostya—who’d been friends with Clementine and her two sisters for at least a decade—had already told her stories of growing up in the Reformed Realm.

I wanted Clementine to be delighted by the artistry seen in every hall, room, and furnishing of the palace I called home. I wanted her to be honored, cared for, and coddled by my staff. I wanted to watch her walk the gardens laid out within the palace’s walls and explore the forests and mountains within a day’s walk.

I wanted her to know there was place for her in my life. In my family’s life. Mostly, I wanted the Demesne to be given time to weave true connections between us beyond the bonds dictated by fate.

“Is there anything you’d like to know before we leave?” I asked. There was so much I wanted to tell her. I’d leave out the intricacies of demon politics until after we had cemented our bond.

Clementine fiddled with the zippered compartments inside her small suitcase. “What do people—sorry, demons—wear in the Reformed Realm? Especially if they’re going to formally meet your…your mother and father? You had on a tuxedo shirt and a tie and that amazing vest when I met you. Do you wear clothes like that all the time?”

Shit. I had been dressed to the nines when Kostya burst into Saturday evening’s formal event and announced he needed my help. The look on his face broadcast there was no time for questions, let alone a change of clothes. I had said yes to my brother immediately and begged our mother’s forbearance with the promise I would make it up to her.

Secretly, I was relieved to have an out from the party. The invitation said the gathering was to celebrate an obscure demonic holiday relegated to distant memory. My father, fanatically obsessed with British baking shows, had been searching the Hall of Records for something to celebrate in early October.

He’d found it in Thesmophoria, an ancient Greek festival honoring Demeter and Persephone, life and death, seeds and harvest. Dad edited out the part about the festival being female-only and focused instead on preparing extensive menus with copious amounts of food, desserts, and fermented drinks featuring the bounty of the Reformed Realm’s fertile lands.

My mother agreed to resurrect the holiday with a lavish celebration—and an ulterior motive. For her, any sizeable gathering was an opportunity to parade the Realm’s eligible females in front of me and my brothers in the hopes we would be smitten into claiming our mates and popping out grandchildren.

Mother was forward thinking in many ways. But when it came to her desire to extend our family’s hold on the seat of power, she clung ruthlessly to outmoded notions. She could have tried to hold greater sway over Kostya, except he’d chosen to spend most of his time living and working outside the Realm. She might have had greater success with my youngest brother, Iván if she added eligible males to the parade of possibilities.

She might even had more success with me—except her methods made me feel like I was a prized stallion being leased out for stud services. With Clementine at my side, I could close out that long, painful chapter of my adult life.

“I was at a formal party when Kostya found me,” I explained. “I rarely dress like that, but if you’re concerned with your appearance, there are places to shop quite close to the palace. I can even send someone out to—”

“The palace? We’re going to a palace? Laz, I can’t go to a palace dressed in a…a jumpsuit.” She bent forward and grabbed at her pant legs. Straightening, she showed such vulnerability on her face I had to take her distress seriously.

“If different clothes would boost your confidence, then we’ll have my tailor meet us in my quarters. His team will ready whatever you need while we rest, or eat, or…” My gaze raked her body, sparking my arousal and feeding the Demesne’s hair-trigger hunger. I wanted the witch, I wanted her now, and the Demesne was one-hundred percent behind my desires.

“Or what, Laszlo?” Clementine’s expression shifted from worried to hungry. I took her hand and drew her onto the empty single bed. She settled half on my chest and reached for one of my horns. I groaned as the bone expanded into her touch. Normally, I had more control over my horns’ response to direct contact. Clementine gasped, squeezed tighter, and positioned herself across my body, taking hold of the other horn too.

Though I’d traded the fire I was born with for ice, the shift had no effect on my body’s heated response to feminine touch.

Amend that. To feminine touch I invited. Touch that spoke of mutual desire and reciprocity. Touch that did not have the question of duty to crown and country coloring every stroke. “Is this okay?” she whispered, sliding her hands to the tips of each horn and back up again.

“Yes.” I moved my hands down her back and cupped her ass. “Is this okay?”

“Squeeze harder.” When I did as asked, she sucked in a breath, adjusted her pelvis, and spread her thighs wider. “I think an orgasm would really help lower my stress level.”

I pressed my head back into the pillow. “Mine too,” I said. “But I don’t think this is how we’re supposed to honor the Demesne.”

“Before we leave Northampton,” she said, “I have to go back to my mom’s place. There are a few things I want to bring with me.”

Clementine used a brass key to unlock the front door of Needles and Sins, her mother’s long-shuttered shop. I could see where my brother had layered his signature spellwork over wards created by others, all of which was meant to mask the store’s long vacant interior from human eyes.

“What do you need?” I asked, leaving her suitcase by the front door.

“The shop coat that my mother always wore and her favorite scissors. I think I left them on the third floor.” She rubbed her upper arms and stomped her feet. “It’s cold in here.”

Clementine took a couple of steps into the room, stopped, and sniffed the air. “Do you smell that?” she asked. “Burned candles?”

“I do.” I grabbed my witch’s wrist and drew her toward me. “Wait. Last time we were here those long tables were in the middle of the room.”

“There’s a circle on the floor.” Clementine pointed downward. “And a pentacle and candle stubs.” She pulled me forward with her. “I wonder…” She crouched. I went to one knee beside her and watched as she waved her hand over the powdery substance on the floor. “This is Alderose’s magic and I think what she made here is a circle of invocation. And look” —Clementine stood and walked a quarter way around the circle— “Boots. Those are my sister’s boot treads. These are someone else’s. She had company.”

“Do you want to call her? Does any of this worry you?

“No. I don’t really want to see or talk to either of my sisters right now, Laz. And I’m not going to let this worry me. Not now at least.” Clementine walked through a section of the broken circle, scuffing the line even more, and headed to the back of the room. “Are you coming upstairs?”

Later, near midnight, Clementine and I stood at the front of a centuries-old church in the center of Boston. Complicated cloaking spells built into the stone walls and the walkway surrounding the one-room structure kept it invisible to humans. “This is it,” I said, planting my hand on one of the double doors and taking Clementine’s hand with the other. “Are you ready?”

“No. And yes. I don’t know, Laszlo. Are you ready?” Her wide-eyed look and the range of emotions filling her velvet brown eyes awakened a protective instinct I didn’t know I possessed.

“Clementine, I can’t promise this will be easy. I’d be a fool to do that and you’d understand the lie the moment you meet the courtier who will greet us. Julian is an absolute asshole—until he gets to know you. Then he’s just an asshole.”

My witch laughed and relaxed her fingers. I pushed the door open and reached for the handle of her suitcase. Clementine gasped, hesitating to cross the thick slab of granite marking the transition from the human realm, to an anteroom of the Reformed Realm. The crumbling plaster on the building’s exterior belied the effort that had gone into creating a terminus deemed fitting for a royal family.

I was the oldest son in that family. I’d grown up within the undulating walls of an architectural wonder and was used to seeing every available surface treated as a potential work of art. Within our realms, demonish artisans were renowned for their skill with wood, metal, glass, tiles—every known material. Occasionally, an artisan found their way into the human realm. One look at some of Barcelona’s most iconic buildings would confirm that.

“C’mon,” I said, propping the door open with my back. “This’ll be a lot like taking a regular portal, only smoother.”

← Previous: Evolution of a Book Cover Next: Why Indie Authors Need Book Reviews →