There had to be teenagers in my first Urban Fantasy series. As the mother of four boys, I wanted to give my heroine sons of her own. I figured I could write them with…authority. Bringing a passel of teens into the MAGIC-verse has been a way to honor the many kids who have blessed my life.

Harper, Calliope’s older son, is 18 when the story opens. Thatcher is 16 1/2 (I picture them a bit like the two young men in the image below). Leilani is Harper’s girlfriend. All three attend the same high school, Mondays through Thursdays. The schedule mirrors the one at Gulf Islands Secondary School here on Salt Spring Island.

On Tuesdays and Saturdays, the two boys work at the Saturday Market, helping out at one of the big farm’s stand. Leilani assists her fathers, Malvyn (a sorcerer, jeweler, and Enforcer for the Magical Justice System) and James (a Botanist and half-witch) when she’s not in school.

To describe them in any more detail would entail sharing spoilers! When I finished book 3, MAGIC REDEEMED I was left knowing that at some point, the teens will get a story of their own. 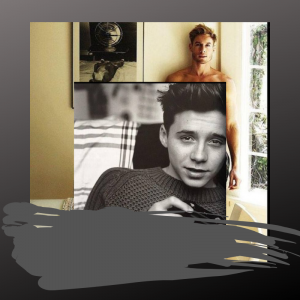