Tanner Marechal, love interest for our heroine, Calliope Jones is a ‘perpetually thirty-seven-year-old’ druid. His job with the Province of British Columbia has him investigating the same anonymous complaint.

The man is somewhat enigmatic. He holds his cards close to his chest, which Calli notices. She also notices that same chest is rather…nice (because, after all, the first three books in the MAGIC series contain a slow-burn romance). Tanner’s intelligent, intriguing, willing to share his resources. He never belittles Calli’s magical skills. His backstory unfurls slowly through the first two books of the series.

Tanner was inspired by a man I met ‘in real life’. I found it fascinating that within the space of a handshake and a few words, I had my hero sketched out. No, I won’t say where or when. Only two people–my husband and my writer friend, Connie–know those particulars and they are sworn to secrecy! 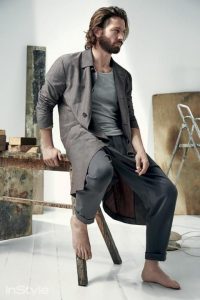 The actor, Michiel Huisman is now my go-to for all things Tanner Marechal. Notice the bare feet. And what they say about writers is very true. You never know when *you*–or something you say or do–will get written into a book.

A trio of druids provides Tanner with friendship and support. River de Benauge, Wessel Foxwhelp, and Kazimir Wickson. If you’re an aficionado of apple varities you *might* have noticed the proliferation of apple-y names: Marechal, de Benauge, Foxwhelp, and Wickson.

The use of apples in naming many characters was deliberate. The working title of the series was ‘The Applewitch Chronicles’ and when I went to Salt Spring Apple Company’s website to do research, I had a field day. So many intriguing names! So many mouth-watering descriptions!

Check out the visual inspiration board for Magic Remembered on Pinterest.

MAGIC REDEEMED, the final book of the first MAGIC trilogy, releases on June 6, 2019.