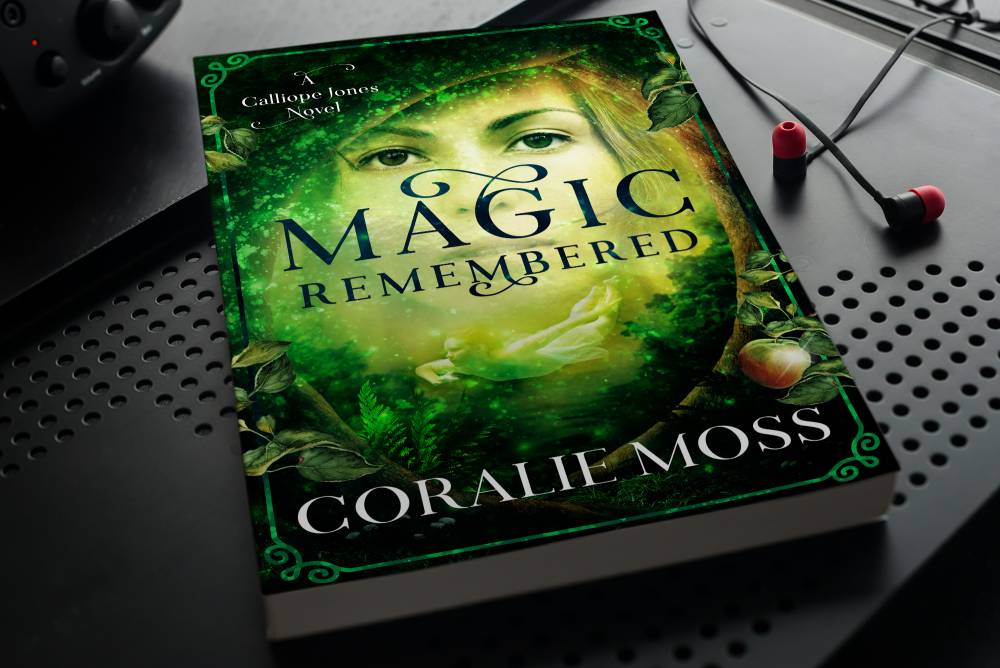 I rued the day I downloaded ShiftR, the dating app designed for witches and the like. My first experience with swiping found me grimacing at my ex-husband’s smug face and wondering why the avowed magic-hater was trolling for non-humans. Swiping in the other direction—over and over—eventually netted two possible matches, both of them werecougars living across the channel on Vancouver Island.

After a cluster of dating disasters, I wanted a no-strings-attached romp. Choosing one shifter over the other because of a shared interest in vintage Airstream campers, a romp inside a restored, aluminum-sided Clipper was exactly what I got. But even in his fully human form, the werecougar’s combined size and enthusiasm may have led to a busted condom.

And now, my period was almost two months late, and I couldn’t make myself pull open the glass door of the medical building, step over the threshold, and show up to my appointment at the women’s health clinic.

Calliope Jones, you can do this.

Not emphatic enough. I needed a middle name. I hadn’t been given one and before I could tumble onto the map of dead ends that comprised the missing pieces of my ancestry, the glass door banged open. A very pregnant woman lumbered out. I gripped the door handle and watched as she waddled to her nearby car.

That could be me in seven months.

Nursery décor themes danced in my head as I entered, registered and accepted a plastic cup. I dutifully peed and followed a nurse’s Medicinal Pink-clad backside down the hallway and into Dr. Renard’s office, where I used the wait to review my options as a possibly pregnant forty-one-year-old divorced mother of two teenaged sons.

I helped myself to the water cooler, swallowing against a rise of nausea. Another wave from the center of my agitated belly to the base of my throat sent my eyelids slamming shut. Nausea had been an issue nineteen years ago, when I was in my first trimester with Harper. It was going to be an issue again.

I finished the water, crumpled the cup, and opened my eyes to Dr. Renard’s concerned gaze. “What brings you here today?”

Dr. Renard scanned the medical records displayed on her laptop and glanced over thick green eyeglass frames to the nurse hovering in the doorway. “Did we get Ms. Jones’s urine?”

The nurse nodded. “Three more minutes and we’ll have the first results.”

The door snicked closed, and my belly clenched again. Dr. Renard leaned in, placed freckled hands firmly on my khaki-clad knees, and looked at me head on. “Calliope, we haven’t known each other very long, but you are under my care and you can tell me what’s going on.”

“The guy I was with suffered a condom malfunction,” I blurted.

The kindly doctor arched both eyebrows over her big, cornflower-blue eyes and hmmed. I fidgeted with the snap on the flap of my pants’ thigh pocket as my feet broke out in a sweat.

“My sex life since my divorce was finalized has been the stuff of legend. You know, the kind of legend that’s fodder for someone else’s comedy routine.” The calendar tucked in my underwear drawer—a place I knew my sons would never explore—recorded one dating disaster after another from the moment I decided to dip a toe in the proverbial pool.

Hands tapped the outsides of my knees, and another comforting hmm reached my ears. Dr. Renard pushed her rolling stool away from the upholstered chair as a soft knock sounded at the door.

The same nurse handed over a piece of paper and slipped out of the room. Dr. Renard read the results, glanced at me, and smiled, folding the paper in half and half again, before tucking it into a pocket of her lab coat.

“Calliope, I have some good news.” She leaned back and crossed her legs. “You’re not pregnant. The more likely scenario is you’re starting menopause.”

I exhaled in relief and quickly inhaled confusion. Menopause meant the end of…of rapturous sex and luxurious hair, and I was in no way prepared to give up on either, especially since I had yet to experience the kind of sex I was currently on a mission to find. “But I’m only forty-one!

(Later in the chapter)

“My magic isn’t very strong.” Shrugging, I rubbed my now-sweaty palms on the examination smock, unable to fully breathe out. “I’ve tried to use my mother’s old books and notes to teach myself basic spells and counter-spells, but there’s nothing in them about what to do for…for menopause.”

“Calli, would you like me to put you in touch with my local contacts?”

“I would,” I said, feeling hopeful for the first time in days. Months. “Are you in a coven?”

She nodded. “I am. And I’m trained in Western medicine too. Obviously. What about your ex-husband? And your sons?”

“I suspect Doug’s mother had some magic. And I think my boys do too, but…Goddess, this is hard to admit, Dr. Renard…”

“Rowan. Okay.” I sucked in a big breath. “I’ve never actively sought the company of other witches. I mean, I haven’t avoidedthem, but my husband—my ex-husband—insisted I not use my magic and it was just easier to not practice, to not even talk about magic.”

← Previous: Witchy Wednesday: What we're reading Next: Countdown: 7 Days to Launch a Book →