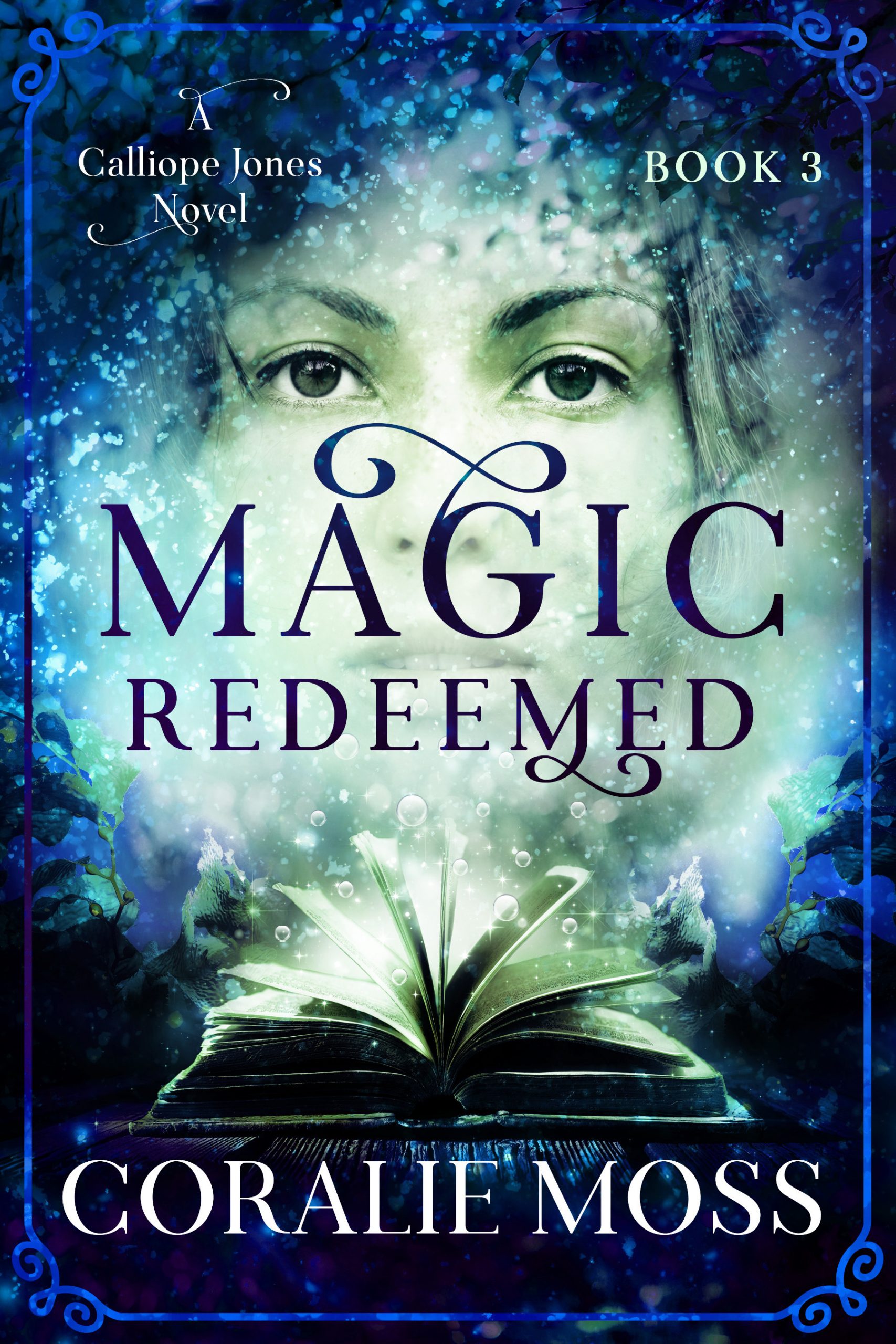 I was finished with the Apple Witch. My oldest son was in the Northwest Territories, healing from his wounds. His brother was at home, awaiting the emergence of his own magic. And Tanner? My druid was in the French Alps, finalizing his commitment to his teacher.

I didn’t trust the quiet that had settled over the island. Nor did I like the instability I felt as my earth magic was challenged by a stronger force.

I never again wanted to go through the agony of having an enchanted tattoo removed. But here I was, on a sunny day in the middle of September, facedown on a padded chair at Salt Spring Island’s only tattoo parlor, getting inked.

“Ready?” River, a druid of indeterminate age, settled onto the rolling stool and donned a pair of bright blue non-latex gloves. His cohort, Tanner, had been the one to excise the old tattoo by means of a chant, which had lifted the ink along with a layer or two of my skin.

“Ready as I’ll ever be,” I said, giving a relaxed thumbs-up. A local plant witch assured me I could use a heavy hand with her proprietary blend of pain-relieving herbs. The drops tasted of crushed grass and they worked wonders. I was in no discomfort, physical or emotional.

Once I was certain I wanted this tattoo, I tasked River with creating a design that would honor my Aunt Noémi and her animal familiar, a towering Kodiak I knew as Bear. Noémi had raised me from age six on, dying from complications of her dementia over the recent Labor Day weekend.

The stories I told myself about my aunt and her hands-off parenting methods were based on a series of profound misconceptions. I had thought she didn’t care about me, or resented that my mother’s death left her with a third child to raise. The truth came to light in August, when a moment of lucidity from the depths of her dementia had shed a hazy beam of light on my childhood.

With narrow swaths of the past growing clearer, I had even more impetus to uncover what triggered my mother’s and my flight from an idyllic, small town in Maine to my aunt’s home in British Columbia some thirty-six years ago.

The serious edge to River’s voice made me laugh. “Is that you telling me politely I have a hairy back?” I asked.

“No, no, not at all,” he said. “You’ve got peach fuzz. I didn’t want you to be surprised at the sensation.”

“So far, everything about this experience rates better than my first.” I shivered as a droplet of cool water slid underneath my armpit. River patted my skin dry, sprayed a different liquid across my neck and upper back, and pressed on the transfer.

“Stay still.” His fingers smoothed over the paper before he peeled it away. “Perfect.”

I exhaled, sinking the front of my chest into the towel-covered padded support, only to jerk when he started the motor that powered his set up, and again when the needle bit into my skin.

“Steady, Calli. The first few minutes are the hardest.” River set up a rhythm of applying gentle pressure with both hands, lowering the needle, then drawing a line. I wanted to say the movements were soothing, but the constant drone of the motor set my teeth on edge.

“I’m creating the outline first,” he said. “Then I’ll fill in the solid areas.”

“How long did you say this was going to take?”

I tuned out the noise, slipped one foot from its wedge-heeled flip-flop, and spread my toes against the flooring. Keeping my eyes open—which was something I had to make myself practice because accessing magic with eyes closed was not always going to be possible—I rooted straight down. Linseed oil, pine rosin, and powdered cork, compressed to create the squares of linoleum flooring warmed by the bottom of my foot. Below that, a cellar gaped lightless and forgotten, its dirt floor mostly void of living things.

I wasn’t fond of those kinds of spaces and quickly sent my inquiry in a more horizontal direction until I reached the weeds edging the alleyway and the trees lining the sidewalk. Sweet, green, rooty relief.

My mostly dormant magic had reawakened less than two months ago. As a forty-one-year-old witch, that meant I had to uncover and practice my gifts as much—and as quickly—as possible. And I had to study, as in books and lectures and labs and bouts of imbibing too much coffee. At the urging of River’s sister, Rose, now the head witch of the Pacific Northwest Covens and a woman not to be questioned, I enrolled in a five-year Basics of Witchcraft program. I was a handful of sessions in and already itched to condense the time commitment to two or three years.

With that goal in mind I had taken a leave of absence from my position as an inspector with the local Agricultural Commission’s office. My former assistant texted me frequently. Otter or cat gifs meant Kerry was having a good day. Terse messages describing my temporary replacement’s antics meant she missed me. Today, I was on the receiving end of multiple images of kittens. I had to admit I missed Kerry, the regular contact with the farmers and orchardists, and the steadying presence of a forty-hour workweek.

Then again, upheaval had been the theme of my life since that first tattoo was removed and my magic had come back online. I kept telling myself that once my sons and my niece, Sallie, had settled into the routines of high school and work, I’d have more bandwidth for my magical education. I would find a coven, immerse myself in magical studies, and practice, practice, practice.

Or so I hoped. I nudged my sensitive foot and toes farther and felt my way into the tasty spots of magic lingering inside the nearby bakery. My mouth watered.

There was also the task of integrating my paternal grandfather into our lives. Christoph Courant had dropped from the sky—swooped, actually—onto my lawn barely six weeks ago, right at the end of a traumatic confrontation with my ex and his extended family.

Gramps, as my sons, Harper and Thatcher, had taken to calling Christoph, was a gyrfalcon shifter and a leader among the magical communities in the Northwest Territories. His white wings, speckled with black, were magnificent and permanent, and the genes he carried passed to his only son, Benôit.

Benôit was my father. I had no memories of the man, yet it turned out that at least one of my sons, Harper, was following in the gyrfalcon’s footsteps. Or claw prints. Within hours of me being released from the spell inked into that first tattoo, Harper’s magic began to emerge. The speed of his physical transformation was wrenching, painful, and not entirely welcomed. Christoph had spirited the frightened eighteen-year-old to northern Canada to help him recover and to give him space to live among other winged shifters while he explored his options.

“What’s the latest on your eldest?” River asked.

“You reading my mind again?”

“Mm-hmm.” I couldn’t see his shy grin but I knew it was there.

He continued to puncture my skin with the needle and didn’t answer.

“You know, you druids really have a lock on this whole enigmatic thing,” I teased, keeping my body relaxed. “How’re things going with Airlie?” Airlie Redflesh was another local witch. She had been one of thirteen at my initiation ceremony and assisted with the online lectures. Knowing I had a “thing” developing with one of River’s friends, she’d confided she had a mild crush.

The druid took his time answering. “Airlie and I have a date scheduled for Friday night.”

“Ooh, love is in the air.” My toes tingled in anticipation of chatting with Airlie afterward.

“Calliope, this is our first date.”

“Terrified,” he said, lifting both hands off my back and leaning away. “She’s a water witch.”

“But otter’s one of your forms,” I pointed out, unsure why a mutual connection to one of the natural elements would be problematic. I resisted the urge to push away from the chair and look over my shoulder. “It’s the one you shift in and out of the most. Airlie’s into water and you are, too, but in a different way—ouch. Isn’t that like a perfect match?”

“That’s what terrifies me.” River again settled into his task. I breathed through the constant, grating buzz of his machine, focusing on the floor and on parsing the magical signatures in the surrounding buildings.

And picturing how my older son’s recovery was going. The sparsely populated, physically spacious Northwest Territories were perfect for shifters and others like Christoph and Harper. The place was less supportive of Harper’s girlfriend, Leilani. She was a witch and a natural imbuer whose magic—a blossoming combination of witchcraft and spell-work—was closer to her fathers’. She had lobbied hard to go along to lend emotional support and, if needed, to work in the kitchens of the shifters’ compound. If she wanted to leave, home was only a few portal-hops away.

“Oh, in answer to your question, Harper’s doing well according to Christoph. Leilani’s reports are a little less rosy, but I get the sense going north was a good decision for her, too.”

Riverhmm’d, then said, “You can get up and stretch—take a break. I’ll fill in the shaded areas next.”

“Thanks.” In the bathroom, I tried to peek at the design without success. The space was too tight to maneuver.

Back in the chair, I had to ask River myburning question. His friend—and my maybe-boyfriend—had been off the radar and completely incommunicado for weeks. Though I suspected the absent druid was behind the chunks of raw crystals I kept finding on my porch steps. “Have you heard anything from Tanner?”

Gaah.I had to close my eyes and concentrate on breathing in and out until my skin again acclimated to the sensation of the needle.

“You know Tanner’s teacher is one of the oldest and most venerated druidesses, yes?” he said.

I went to shake my head, when River lifted the needle and reminded me to stay still.

“I didn’t know that. But I don’t know much about druids.”

River exhaled through his nose, “Ni’eve du Blanc comes from a different time and she continues to live and teach at her own pace.”

“Is that your way of saying you haveheard from Tanner?”

“I’ve heard through the grapevine that negotiations between Ni’eve, Idunn, and what’s left of the Keepers have reached a very delicate balance.”

Oh. A Keeper of the sacred trees that bore the Norse Goddess’s beloved Apples of Immortality had gone rogue. That rogue Keeper—Ni’eve’s daughter, Jessamyne, aka the Apple Witch—had been involved with my maybe-boyfriend.

She had also set her sights on eliminating me from the competition for Tanner’s attention.

“Calliope, druids become druids because they survive their training, not by an accident of birth. Tanner’s a good man who takes his obligations seriously. He’ll finish with Ni’eve, and then he’ll be back.” River lifted his inking gun and released the foot pedal. “I need to take five,” he said. “My hand’s cramping.”