Maritza Brodeur is a witch and Professor of Necromantic Studies. We first meet her in book two of the MAGIC series, Magic Reclaimed. She is in her early forties and is sister to the sorcerer, Malvyn Brodeur. Maritza and Malvyn’s sister, Moira, died seven years ago. (We’ll meet Moira’s three daughters–Alderose, Beryl, and Clementine–in an upcoming series.)

Maritza is on a year-long sabbatical and has moved to Salt Spring Island at the invitation of Malvyn and his husband, James. She took them up their offer, in no small part, because it would allow her more time with her niece, the budding witch with Imbuing skills, Leilani Brodeur (girlfriend of Calliope’s son, Harper). Plus, she gets a wing of the house to herself.

Although Maritza is on sabbatical, she has taken on an apprentice for three months. His name is Alabastair Nekrosine. We’re keeping our eyes on these two…

Maritza is introduced in chapter six. The setting is the farmhouse at the Pearmain property. She is walking toward the back side of the house.

“A wavering shape emerged from the worn and weathered path leading to the older parts of the orchard. What I first read as heat rising from the dry ground and distorting the figure’s clothing was, as they shuffled closer, not the effect of heat at all.

A middle-aged, average-sized female was accompanied by a cloud of shimmering particles, browns and greens from across the natural spectrum intermingled with flickers of purple and yellow.

The woman stopped walking and squatted. The confetti-like bits dropped with her. She raised her arm away from her shins, described a generous circle around herself, and made sweeping motions with both hands until the particles collected themselves into a conical pile.”

Later, she relates the story of her birth:

“I was born in a Mexican cemetery on the night of November first, Día de los Muertos, when the veils between the living and the dead lift. My father was embarrassed and horrified, but my mother sought to make good use of the moment—and perhaps to annoy her husband—and like the wily bruja she was, told no one but her best friend that she was well into labor when she joined our town’s procession to the graveyard.

“She swaddled me in one of my grandmother’s woven rebozos and tucked me into a coffin made for a baby. Not a specific baby.” She leaned forward and shook a blue-tipped finger at me. “My mother’s sense of humor was not that macabre. Coffins are plentiful that time of year in San Miguel, as are candles, calaveras, and calacas.”

I quirked my head at the unfamiliar words.

“Skulls and skeletons. Decorations,” Maritza added. “Once I was securely ensconced, my mother released my unadorned, unremarkable, unpainted pine coffin into the crowd, whereupon I was paraded around the graves while she delivered the afterbirth and buried it in the ground. To this day I can feel the scratchy wool of my grandmother’s shawl against my tender skin.” She lifted her glass, indicating I should pour her more lemonade. “Beginning my life in a graveyard, during a celebration of life and death, was a gift. This has allowed me to truly see and know that Death is simply another phase of Life.”

I lived in San Miguel de Allende, GTO, Mexico for almost five years. The photograph was taken inside the town’s biggest cemetery during a Day of the Dead. Everyone was welcome to walk through as the altars were being set up. Only family members and friends of the deceased were allowed to stay after the gates were closed around 5pm. Celebrations continued through the night. 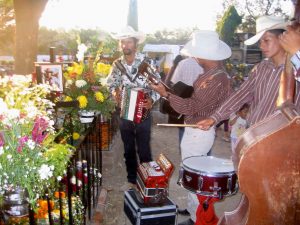 ← Previous: Here, Have An Urban Fantasy Heroine Who's Over 40 Next: Morning Rituals →